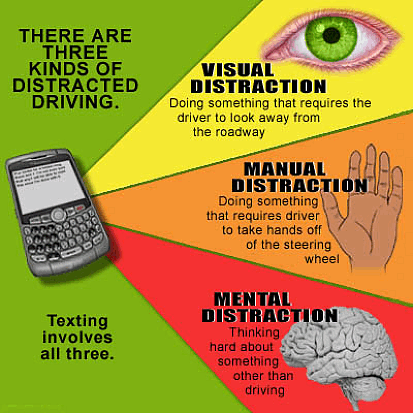 “Driving is a complex task, requiring a motorist’s full attention,” CHP Commissioner Joe Farrow said. “Imagine driving for four or five seconds while blindfolded. That can be the effect of looking down while driving to send a text message. In the average time it takes to send a text message – less than 5 seconds – a car travelling 60 mph will travel the length of a football field.”

Collisions caused by distraction occur daily throughout California. In 2013, there were 50 people killed and nearly 4,000 people injured as a result of driver distraction.

Throughout April, officers in each of the CHP’s eight field Divisions will focus their efforts on educating the public about the dangers of distracted driving through local media interviews, visits to schools, and traffic safety presentations. In addition, two dates (April 1 and 15) have been earmarked as special statewide education and enforcement days for all law enforcement agencies that are participating in the traffic safety campaign.

The urge to read and answer a text message when hearing the text notification can be enticing. The OTS has adopted the message of “Silence the Distraction” in new public service announcements aimed at getting drivers to turn off cellular telephones while driving so they will not be tempted. In addition, an outreach event featuring texting cartoon “emojis” will be touring community colleges throughout the state to engage the most vulnerable texters – 18- to 30-year-olds.

“No text, call, or social media update is worth a crash,” said OTS Director Rhonda Craft. “With an average of less than a second to react to an urgent situation on the roadway, drivers need to have all their attention on the road.”

While distracted driving can take many forms and affects all road users, younger drivers pose a greater risk.

During California Teen Safe Driving Week, April 1-7, Impact Teen Drivers will focus on educating teens that the number one killer of teens – reckless and distracted driving – is 100 percent preventable.

“People are realizing everyday behaviors, such as texting or reaching for a dropped item, can be lethal when done behind the wheel,” Kelly Browning, Ph.D., Executive Director of Impact Teen Drivers, said. “The next step is more complicated—getting people to choose to change their behavior.”

Safe driving is the responsibility of all motorists. Parents, as role models, are in the ideal position to demonstrate good behavior to their children operating a motor vehicle.

“All of us who drive are responsible for keeping the roads safe. If you have teenagers in your family who are driving, make sure they understand the laws and what their responsibilities are as well,” Commissioner Farrow added. “The collective goal with this month-long campaign is to change the behavior of all drivers to eliminate distractions behind the wheel. That change begins with education.”

View all posts by Bill →

If your county is not listed, please
click here.